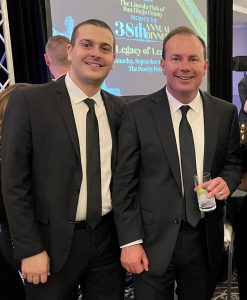 On September 17, 2022 the NMA attended the Lincoln Club’s Annual Dinner held at the Pendry Hotel. The keynote speaker of the event was Utah’s Senator, Mike Lee. Senator Lee is a child of politically active parents as his father served as President Ronald Reagan’s Solicitor General. Prior to entering politics, Senator Lee practiced law as an assistant U.S. Attorney. During the dinner, Senator Lee touched on supporting the economy in times of trouble and empowering businesses. The NMA enjoyed a wonderful dinner with fantastic cocktail and dessert sponsors. We are grateful to have the chance to attend such a magnificent event that advocates for San Diego taxpayers and businesses, and we will continue to support organizations that uphold our values. The NMA is a proud supporter of the Lincoln Club of San Diego County, and its 38 years of advocacy for taxpayers and businesses.